Mr A is a 67 year old man who presented having been noted by his family as developing memory problems for 2-3 years with deteriorating mobility. On questioning he admitted to a number of episodes of wetting himself and being unsure of how this happened. He underwent a CT and MRI which showed a possible diagnosis of normal pressure hydrocephalus. He was admitted to hospital and had a lumbar puncture after which he felt his memory was improved and he was able to perform better in a timed walk with the physiotherapist. He underwent placement of a VP shunt with considerable improvement in his mobility.

Normal Pressure Hydrocephalus (NPH) was first described in 1965 and is increasing important given the aging population and burden of dementia. It represents one of the few causes of dementia that is treatable.

Normal pressure hydrocephalus may be idiopathic or result from a predisposing condition such as post trauma or meningitis. The classical presenting symptoms of gait disturbance, dementia and urinary incontinence. The gait disturbance is that of a wide based gait with shuffling steps and unsteadiness. The patients often feel as if their feet are glued to the floor, the so called magnetic gait. The dementia consists primarily of memory impairment and slowness of thought.

These clinical signs have wide overlap with other forms of dementia or even more simple problems of the elderly such as urinary tract infections. Unfortunately, imaging is of limited value. The key features of NPH on CT and MRI are of ventriculomegaly (large CSF ventricles) out of keeping with the usual cerebral atrophy (brain shrinking) that accompanies aging. This can be a very subjective but be measured with the Evan’s index. Radionucleotide studies can be useful and show delayed clearance of tracer from CSF after 48-72hrs. 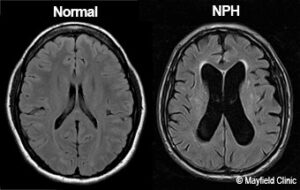 The most widely used clinical test to assess patients with suspected NPH is a “tap test”. The patient undergoes a lumbar puncture with high volume CSF removed (40-50mls). They are assessed both pre- and post-lumbar puncture with gait and memory tests.

In the presence of a history and imaging suggesting NPH and a positive “Tap Test” most patients will be offered a VP shunt for treatment. This results in improvement in gait disturbance in approximately 75% of patients for whom that was their main symptoms. Unfortunately, the cognitive features of this condition such as memory impairment does not respond as readily to shunt surgery.

Any patient with suspected NPH should be seen by a neurologist to assessment and to rule out other causes of dementia and then referred to a neurosurgeon for consideration of shunt surgery.

Contact our friendly clinical team to find out more.

Briz Brain & Spine is a group of dedicated neurosurgeons and orthopaedic spinal surgeons who aim to provide the best patient care possible in a true team effort.