Microvascular decompression of the trigeminal nerve

A 63 year-old lady presented with a 10-year history of left sided facial pain. Pain was described as over the left maxilla with radiation to the left eye and over the left side of the head. The severe pain was intermittent and described as sharp, shooting and electrical like in nature. It was aggravated by, brushing her teeth, touching her face, eating, drinking, and cold wind. She had some associated blurred vision. She denied any hearing impairment. There was no numbness of the face. The pain did not cross the midline or affect the right side of the face.

She was neurologically intact on examination. She denied any significant facial trauma. She had multiple dental reviews with no concerns. Current medication included Tegretol and Lyrica. However she still had refractory pain and did not tolerate an increase in medication dosage.

A MRI/MRA head demonstrated a loop of the left superior cerebellar artery abutting the nerve root entry zone of the left trigeminal nerve. 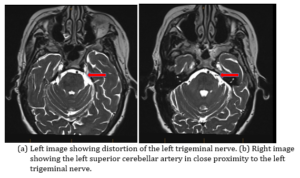 Discussion:
Trigeminal neuralgia (TN) is characterised by paroxysmal excruciating, electric like pain lasting a few seconds to minutes. It is often triggered by sensory stimulus: shaving, talking, eating, drinking, washing, cold wind etc.  As a result this can have significant impact on quality of ADLs such as severe difficulty eating leading to malnutrition and poor dental hygiene. There is no neurological deficits or detectable abnormality of the trigeminal nerve function. Patients can have pain free intervals lasting weeks to months however there is often a considerable fear of the pain returning.

In classic TN, there can be vascular compression of the nerve at the root entry zone most likely by the superior cerebellar artery. An MRI/MRA head is the gold standard investigation to rule out other compressive causes on the trigeminal nerve such as tumour or multiple sclerotic plaques.

The treatment of TN is firstly medical before considering surgical treatment. The decision on which type of surgical approach is based on a variety of factors including patient’s age, medical conditions, and the pain severity. Surgery should be considered in cases of TN refractory to medical management or where significant side effect of medication is encountered. Surgical management includes:

Microvascular decompression (MVD) has become an accepted surgical technique for the treatment of TN, hemifacial spasm and glossopharyngeal neuralgia. The aim of surgery is to remove the vascular contact with the dorsal root of the trigeminal nerve. A retrosigmoid approach via a posterior fossa craniotomy is performed with the patient either in a park bench or lateral position. A piece of padding (Teflon) is usually placed between the nerve and the vessel. Overall 70-80% of patients can become pain free post procedure.

There are many surgical strategies available that can be effective in managing patient with severe TN. Patients with severe TN require thorough consultation and with appropriate treatment can often lead to successful outcomes with a significant positive impact on their overall quality of life.

Contact our friendly clinical team to find out more.

Briz Brain & Spine is a group of dedicated neurosurgeons and orthopaedic spinal surgeons who aim to provide the best patient care possible in a true team effort.